Is technology political? The answer is a resounding yes! All technology is political, though some technologies are more political than others...

In society, we see a trend of increased polarization, there is talk about filter bubbles, and more and more people seem to be living in completely different worlds in terms of their opinions and their "knowledge" of the world at large. At the same time, confidence in legacy media is falling precipitously, and on a trend basis: fewer than half of Americans harbored trust in the media at the beginning of 2021 according to one poll... How did we get here, and what's next?

Technology is neither good nor bad; nor is it neutral.

One way to explain what is going on with these trends is by revisiting one of the most important technological events during the Middle Ages, that is to say Gutenberg's invention of the printing press.

On Gutenberg and Martin Luther

According to some historians (there is not a history, there are several histories - just ask a Japanese person about the origins of World War II to see what I mean), Martin Luther became uncomfortable when he noticed that his parishioners no longer seemed to feel any regret for their sins when they paid for letters of indulgence to rid themselves of their wrongdoings. Perhaps the reason why had to do with the church's usage of (Gutenberg's) printing presses to produce the letters had cheapened them in the parishioners' eyes.

Martin Luther nonetheless reacted, and after a while nailed his 95 theses - all written in Latin - to the door of the Castle Church in Wittenberg (or so legend has it). Some time later, his works were translated into German, and at one point they comprised a full third of all books sold in Germany(!). He admitted to not understanding how his work could have become so popular. In a letter to the Pope he wrote "it is a mystery ... how they [the theses] could have become so widely spread."

The printing press not only made it easier for the church to mass-produce indulgences, aggravating Luther, it also decentralized the information channels of the time. The media topology changed suddenly. Owing to this technological shock, a crisis of common knowledge was imminent, and the Reformation ensued.

After the translation of Luther's theses and the New Testament from Latin into German, the peasantry - at least the small proportion that were not illiterate at the time - could read these texts. What followed was natural: people eventually started to disagree on how to interpret the texts. Disagreement arose, and common knowledge collapsed. Several religious wars ensued, one of which was the bloody Thirty Years War (1618-1648).

That war ended with the Peace of Westphalia which one might argue gave us today's nation-states in a form of compromise: "You take care of yours and I take care of mine."

Technologies - in the broader sense of the word - such as schools, universities, newspapers, radio and television had now been developed, through which a few could send information to the many - even to a majority. Economies of scale also made it possible for the majority of the population to take part in the same information to a very large extent. This strengthened the cohesion of society and a new consensus-building system had been created. Technology had thus created new societal glue, in the form of new common knowledge.

The scientific revolution did however not only bring about centralizing forces (radio, TV, and so on.), but some time later also brought us the Internet as we know it today, and the internet decentralizes information channels similar to what happened after the advent of the printing press. In short, an epistemic revolution... 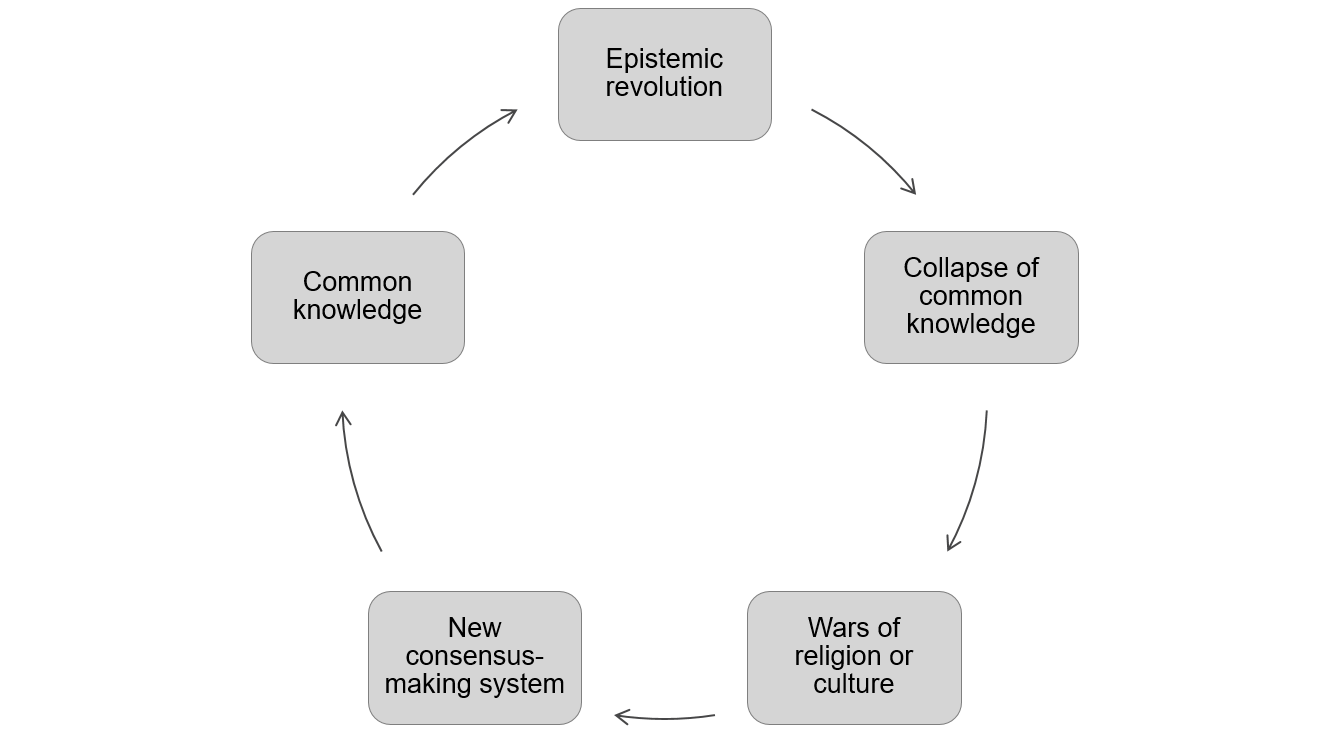 Not unlike how Gutenberg's printing presses eventually enabled the spread of Luther's and the reformists' work during the late Middle Ages, Tim Berners-Lee has given us the web, which has made it possible for almost anyone today to create their own radio or TV channels. Just look at Joe Rogan, he is estimated to reach 11 million people per episode, perhaps more than the popular Tucker Carlson show on Fox News...

Indeed, instead of a few individuals or organizations being in control of information dissemination to the many (as during the "TV era"), today many can easily send to many. Through youtube, instagram, tiktok, rumble, odyssey, bitchute. Or via twitter, parler, minds, gab, gettr or urbit.

Much like in the late Middle Ages, there are no longer any guarantees that the majority of a nation's population will be reached by the same information. Instead, it is now possible to live in different worlds, in terms of information and understanding. Common knowledge is rapidly collapsing, if it has not already done so.

What's more, just as a commons such as a sea can - and probably will - be polluted, today's information commons are experiencing massive pollution. The Internet as we now know it is full of actors who sow division and spread disinformation to promote all sorts of agendas.

"Deep fakes" are about to make the situation worse. Due to AI technology, no one will soon be able to trust any audio or video. Maybe that's a conclusion that should have been drawn already? See for example this hobbyists' Tom Cruise "impression". (What could a state actor do with the same technology?)

It was furthermore recently discovered that British, Dutch and Baltic parliamentarians sat in video conferences with a "deep-fake" chief of staff. (The Chief of Staff of the Russian dissident Navalny...)

Stage 3 - a war of religion, a culture war, or an information war?

Gutenberg and the reformation led to the Wars of religion, of which the Thirty Years' War was one (1618-1648). Today we can often read about a culture war, not a very bloody war, but still a serious conflict it would seem...

Image 2: Gustav II Adolf "The Lion from the North" and his wounded horse Streiff (1632)

One technique used today by polluters of the information commons - a kind of "information violence" - is spreading rumors. This is something that many if not most large organizations are now keenly aware of. The associated "reputation risk" does not necessarily imply caring about having done something wrong, but instead about reducing the risks of being perceived as such. (Baudrillard comes to mind). Of course, this also applies to individuals, who unfortunately can - and do - have their lives ruined by all sorts of rumors - whether true or not.

A lie can travel halfway around the world before the truth puts on its shoes.

--- (Often attributed to) Mark Twain, though this is probably fake news.

The author Neal Stephenson recently popularized the idea of ​​enabling almost anyone to ruin someone else's reputation on the internet in his book Fall; or, Dodge in Hell. The idea is that if everyone can do it, it will contribute to many fewer trusting such rumors (in the miasma, according to Stephenson). Perhaps this will be a natural development due to the decentralizing technologies at work?

The so-called cultural war can at least partly be said to resemble the religious war phase that followed the advent of the printing press. Perhaps it's only in its starting phase, as in Churchill's worn quote: "[t]his is not the end. It is not even the beginning of the end. But it is, perhaps, the end of the beginning".

There are scant signs of new consensus-building systems. Sure, one could argue that media conglomerates and social media companies and so on attempt to fact-check and censor as an attempt to create more societal glue (cohesion) in the form of common knowledge. Though one might also suspect less-than-benigh reasons behind their attempts. "ктокого?, kto kogo?".

Nor does it seem that we as a society or a culture are close to a compromise such as the one around the Peace of Westphalia. Instead, many attempts to censor, deplatform or, frankly, demonize are more resemblant of the bans used by the (to-become) Catholic Church in the late Middle Ages.

Since Martin Luther refused to apologize for his provocations (as defined by the central power of the church at the time), he was excommunicated by the pope in 1520, and he was later declared an outlaw in 1521 by the German-Roman emperor.

The dissidents who today do not denounce their prior beliefs may not be excommunicated by a pope or declared outlaws (yet). But they are instead deplatformed by twitter, facebook, amazon or other platform companies. China has its own "social credit system" which is not very different. (If one were to propose that all so-called dissidents actually deserve to be deplatformed, I recommend reading Paul Graham's essay on the Orthodox privilege.)

Perhaps a new compromise like the Peace of Westphalia is needed before the current "epistemic crisis" has passed, or, alternatively, common knowledge will be required.

What seems clear is that today's societies face great challenges, something that also applies to the internet as we know it...

Image 4: A celebration in Amsterdam following the Peace of Westphalia

Think about the fragility present in today's internet (internet 2.0). Recently, 500 million individuals' phone numbers were leaked from Facebook, something the company has said it will try to "normalize".

When that same company discovered that "some" user passwords were stored unprotected, they meant 600 million... Does it really make sense to "normalize" such massive leaks of private data?

Oracle CEO Larry Ellison once said "the privacy you care about is mostly an illusion. All you have to give up is your beliefs, not your privacy. Because you have no privacy".

But what would happen in society if all instant messages ever written on Facebook or Twitter were leaked and made searchable by the public? Is that a society we want? Or would one then question the reasonableness of centralizing all information to a few IT giants (often in other countries than the one you're posting from)?

Apart from unnecessary centralization, the existence of free social media accounts is behind much of the pollution of the information commons on the internet, through Sybil attacks.

It is indeed possible to envisage a future system where the claims of forecasters, seers or researchers must be registered on public blockchains if they are to be taken seriously. Such procedures would simplify the tracing of those polluting the same commons, which ought to be damaging for one's reputation. Nor could one falsify history as easily for this would leave traces in the blockchains.

Unlike Twitter's verified checkmarks (a mark of shame in some cirlces), a blockchain system would not be dependent on a central authority (see Facebook's problematic leaks above).

By using blockchains it would also be possible to register who first wrote a certain text or created a certain image. This ought to make it more difficult for fraudsters to claim that they are theoriginators, which would further reduce the pollution of theinformation commons.

Perhaps a part of a future solution is Urbit, which strives to be a new internet?

Who is today's Gutenberg - Gutenberg 2.0? Perhaps it's Tim Berners-Lee, the creator of the web - which the author of this piece assumed until recently. But perhaps it is the pseudonymous Satoshi Nakamoto who through Bitcoin and crypto currencies has created and popularized the idea of blockchains?

A perhaps even more interesting question is who is the Martin Luther of our time.

Martin Luther once remarked "printing is the ultimate gift of God and the greatest one". What would Luther have said today about the web (3.0), or about cryptocurrencies?

What are you thinking? Feel free to leave a comment below, reach out to millyt-dorsen (or via the bird app).

Video 1: A Mona Lisa-deepfake - done with a simple app...

Note: Mona Lisa was painted by Leonardo Da Vinci between the years 1503 and 1519.