Well, of course a recession is looming

Well, of course a recession is looming.

In contrast to the PhD's in charge, the US yield curve (i.e. the difference between the 2y yield and the 10y yield on US Treasury bonds) has a fairly long history of being predictive of economic recessions. Most if not all mainstream economists will disagree with this conclusion. That doesn't mean that you should.

The fault does not lie with the experts. 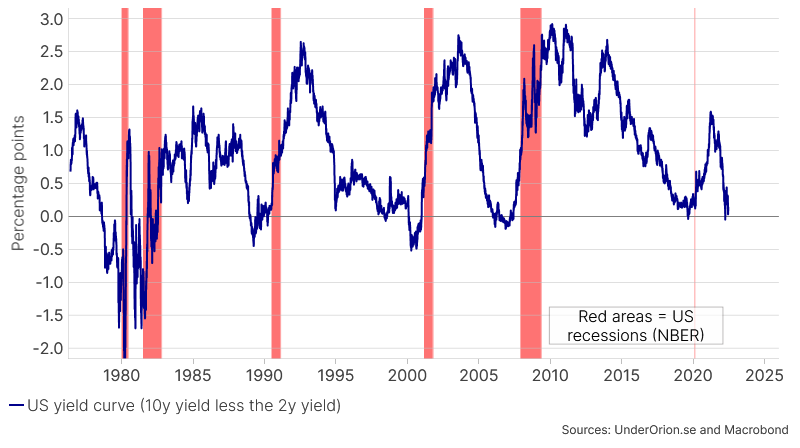 For instance, back in 2018 and 2019 when the curve was flattening like a madman, and eventually inverted in August 2019 around the time of the Fed's Jackson Hole conference, economists such as Fed Chair Powell and US Treasury Secretare (& ex-Fed) Yellen were all disregarding the implications from the inverted yield curve.

Instead the powers that be were heard stating "this time was different", for instance as a result of negative interest rates outside of the US, or perhaps due to massive bond purchase (money printing) programs elsewhere. This prompted some of us to come up with the phrase "yield curve apologista".

As late as November 2019 Fed Chair Powell stated there's "no reason to think, that I can see, that the probability of a downturn is at all elevated".

Often wrong, but never in doubt, as it were. (One might note that central bankers are even paid to deliver fake news, though in economics jargon it's called forward guidance. Alas, pointing this out tends to be considered rude (for some reason).

As usual however, the yield curve soon emerged victorious over the economics profession. The US entered a new recession a couple of month's after Powell's comments, on February 2020. The curve thus either predicted the pandemic (or the response to it), or it predicted a recession was overdue "because reasons", or it was pure lucky (but then it was as usual luckier than the economics profession).

Turning to recent developments, we see that the US 2/10 yield curve has been flattening since March 2021. It also inverted briefly already on March 31 this year. The curve then proceeded to close in negative territory on the first day of April 1, and it was not a joke. The curve has even been in the news over the past week, when it inverted again.

What can recent history tell us about the timing of the next recession and the implications for the S&P500? Let's look at two simple tables.

Table 1. US 2/10y yield curve inversions and recessions since the 1970s

On data since the mid 1970s, an economic contraction on average starts some 15 months after an initial yield curve inversion. If we were to follow this timing the National Bureau of Economic Research (NBER) would declare a recession by May or June 2023.

Looking at the broad stock market index S&P500, the index typically continues to rise by some 29 months(!) after an initial inversion of the curve. This too would appear highly unlikely given that the Fed seems dead set to induce poverty ("reverse wealth effects") in order to dampen inflation pressures.

To the author of this piece this sounds far too late, especially as we seem to be living in a time of acceleration and permacrisis. If we're not experiencing a global financial crisis, it's another current thing such as BLM, Drumpf, COVID-19, or PUTIN-22...).

Figure 2. ISM manufacturing vs US recessions 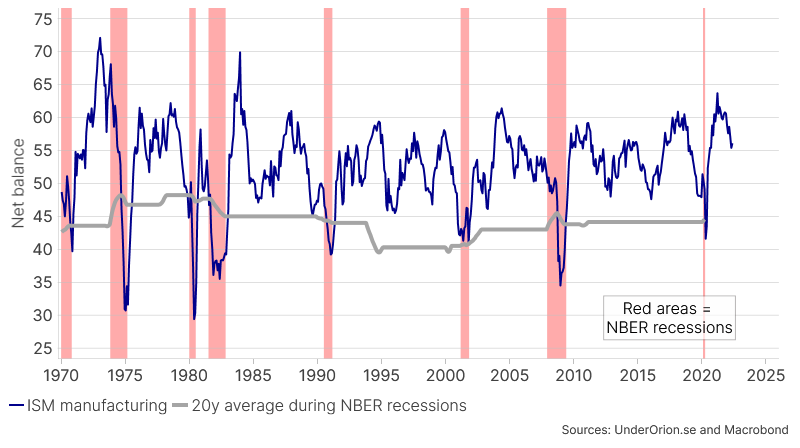 Has the US economy already entered a recession? Perhaps, but the current levels of ISM manufacturing - a measure of business confidence in the manufacturing sector - is not yet at levels typically associated with an NBER recession. I'd thus venture a recession still lies ahead, sometime over the next 12 months. 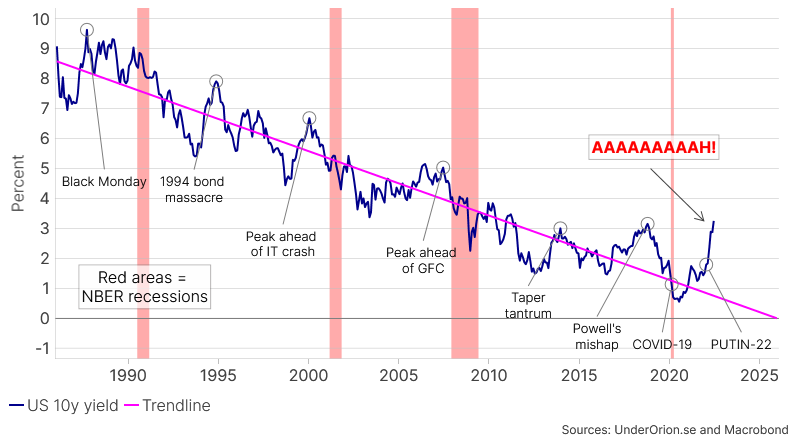 We are already firmly in "crisis territory" gauging by the level of the 10y yield, as the above chart shows. It should thus not be seen as a coincidence that fraud is being revealed in e.g. the crypto space, it's what usually occurs when the global tide of liquidity is ebbing.

While there have been plenty of pain in crypto, in bonds, and in equities already, it's not as if we haven't been talking about the "everything bubble" for several years. Thus, expecting the pain to be over already at this juncture seems like an odd bet. Buckle up, if you haven't already...

*) Or to be more precise: the fault lies in who gets anointed as an expert. It's not that knowledgable people doesn't exist, but somehow they seldom make it through the anointment process...