CBDCs - utopia, dystopia, or both? 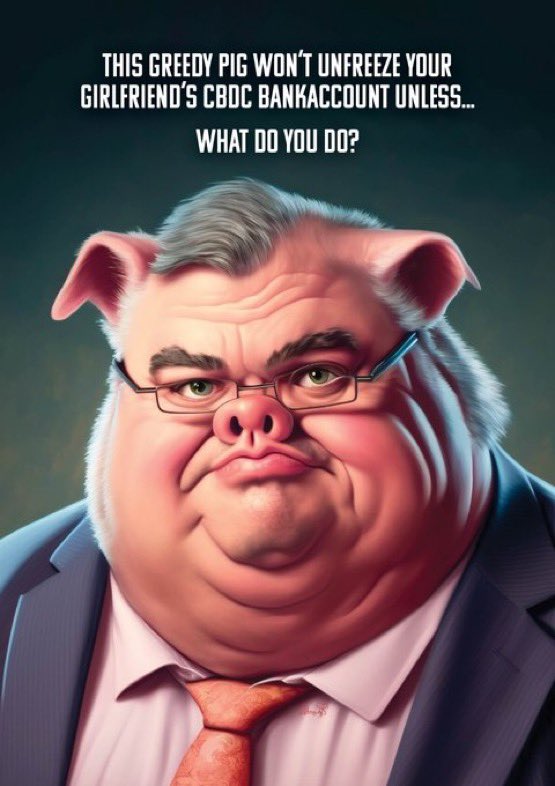 "What is going on!?" the three-year-old exlaimed at the breakfast table the other day. And it's indeed a valid question. Energy and food prices have been skyrocketing, yet another epidemic (monkeypox) has recently appeared to be spreading - at least it was declared a global emergency this past summer, and the world's central bankers are changing their minds so quickly one suspects that they might soon land on their buttocks (perhaps in butter).

And, as so often, regardless of what is actually going on, the ongoing itself is used as an argument to introduce what has long been sought after: "never let a good crisis go to waste". The war in Ukraine is even being used as a pretext to increase the pace of introduction of Central Bank Digital Currencies (CBDCs) - even though current events are completely unrelated to CBDCs in any way.

Much of the discussion surrounding CBDCs in recent years has revolved around central banks' desire to be able to cut interest rates deeply into negative territory during the next recession, which would become possible if businesses and households no longer could flee to zero-return cash.

CBDCs can help close this escape route. If cash is limited, abolished, or if an exchange rate between cash and CBDCs is introduced (this has actually been proposed), there would be no limit to how deep negative rates could get. Your "money" could then be made worthless (rot) at a tremendous pace in the near future - much like in Bokashi composting.

This is what your money could look like in the future

More than a century ago, Silvio Gesell promoted the idea that money should "rot like potatoes". So nothing is really new under the sun. Silvio Gesell eventually became the minister of confiscation in the socialist Bavarian Soviet Republic, a state formation which admittedly - thankfully? - did not last very long.

Now, roughly a hundred years later, we may not have a Bavarian Socialist Republic, but we do have plenty of five-year plans. Perhaps not exact copies of China's Great Leap Forward but nevertheless ambitious ones: Agenda 2030, Build Back Better or The Great Reset - agendas which could all be "helped" by CBDCs...

Past decades of growing AML (anti money-laundering) and KYC (know-your-customer) regulations as well as the plans to monitor bank transactions (USD600 in the US and EUR1000 in the EU) have and will increase governments' power in terms of surveilling what their citizens are up to. But such monitoring can't (yet) prevent spending; only monitor - or punish it - after the fact.

Broad use of CBDCs would however entail complete transparency of all payments from the perspective of the government, something which is not possible today (given the usage of cash as well as correspondent banking), and indeed something which has never been possible in the past. And in contrast to today's banking system, the authorities - the gosplanners - will be able to prevent spending from even occurring.

We tend to create an equivalent to cash but there is a huge difference. Thus, we have no clue who is now using 100 USD or 100 Mexican pesos. The main difference between cash and CBDC is that central banks will get absolute control over rules and standards that would define the use of CBDCs; and we'll also get the technology for ensuring its compliance.

These are the words of the immense Agustin Karstens, BIS general manager and presumed Aztec caviar enjoyer. But perhaps the figure has an even larger appetite for absolute control?

You might also consider the words of Sir Jon Cunliffe, deputy Governor at the Bank of England (when commenting upon CBDCs):

You could think of giving your children pocket money, but programming the money so that it couldn’t be used for sweets. There is a whole range of things that money could do, programmable money, which we cannot do with the current technology.

Or the words by ECB President Christine Lagarde:

There has to be regulation ... at a global level because if there is an escape that escape will be used

There shall be no escaping the plans of today's gosplanners, it would seem.

On the other hand, Neel Kashkari, President of the Minneapolis Fed, argued differently in his Kinsley gaffe (accidentally telling the truth) video:

If the government has full control of your money and knows where and how it is used - who knows what they can do with that power? Perhaps you believe that today's government is completely benign, but what about the next one? Or the one after that? These are legitimate questions that surprisingly few seem to be asking themselves. Or are they perhaps afraid of being called conspiracy theorists?

The financial system is increasingly being used as a weapon

A worrying trend can be discerned if one has paid attention to the financial news over the past decade or so. Despite all the talk about diversity and inclusion, the opposite is happening in the banking sector, often due to government pressure.

Figure 1. Nothing to see here, or a trend?

The financial system is actually increasingly being used as a tool - or weapon, which should be clear to all when we consider the following events (see a more encompassing list here):

But where someone writes "freeze", as in the case of the Canadian truckers' bank accounts, one might as well write confiscate (language games can be played by all sides). Money which you can't use as you see fit, is it really yours? Is it even money? I would argue the answer is actually no, but more on that some other time.

Did you notice when IMF was explicit about keeping voters in the dark?

The financial repression tax has some interesting political-economy properties. Unlike income, consumption, or sales taxes, the repression tax rate is determined by financial regulations and inflation performance that is opaque to most voters. Given that deficit reduction usually involves highly unpopular expenditure reductions and (or) tax increases of one form or another, the relatively “stealthier” financial repression tax may be a more politically palatable alternative to authorities faced with the need to reduce outstanding debts.

Your "money" has already been confiscated, now it will become 100% controlled

Your money has already been confiscated via inflation (inflation is a hidden tax), via financial repression (an orchestrated mix of higher inflation and low interest rates - another way to hide the devaluation of money and 401k(s)). but the "confiscation rate" could accelerate, and the control would become absolute with CBDCs.

What's more, use of any CBDC "money" will be able to be planned to the smallest detail, for the sake of justice, equity, diversity, inclusion, democracy, or for the climate, and so on - all depending on the political trends of the day.

Before we let bureaucrats create this new digital gulag of theirs, bureaucrats who incidentally have no no skin in the game, and whose actual competence could be called into question after the past several years of abject policy failures, more of us should at least be asking if this is such a good idea.

So, are CBDCs carrying us towards utopia, towards dystopia, or perhaps both? It will depend on who you ask. The managerial elites and their jetsetting gosplanners, who see themselves as the salt of the earth and the light of the world, will assuredly think utopia is now within their reach.

But for the rest of us? To paraphrase George Orwell: imagine Agustin's boot, stomping on a human face - forever.