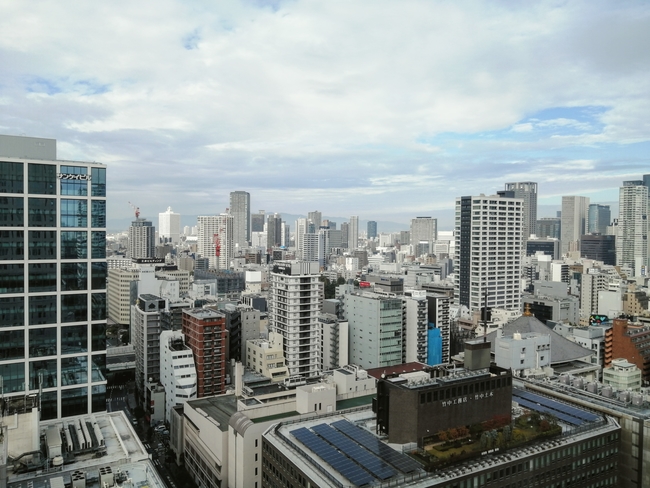 I am leaving Osaka tomorrow.

I had no particular reason to stay past the weekend. I figured I could get some work done, if nothing else, shut up inside a hotel room. I moved to a nicer place. There is nobody around. Unless there is a wedding rehearsal, the lobbies are empty.

The view is not a distraction. It is the same as the view from every Japanese hotel window: gray buildings, running out to the mountains.

I went out to wander around a few times. There was no intention. I went through a few rolls of film. I walked the arcades and then went out to Amerika-Mura (here, so far from America, you can trace the decline of the Empire through what vintage clothes are on offer: now Americana doesn’t mean LL Bean and Ralph Lauren but oversized basketball jerseys and fuzzy pajama pants that look like they were peeled from victims of the opioid epidemic). I’m sure I can’t write anything about Osaka. Nothing new, at least. I could only write that the stereotypes are true.

I can tell you this: there are so many pretty girls in Osaka. I repeated this to my companions on Friday night. It is not their prettiness that I find remarkable, but their number. In the covered arcades around Kakudacho, they seem to outnumber the men five-to-one. They loiter in motorcycle jackets in Shinsaibashi. They walk around in black suede boots that make it appear as if they have hooves emerging from under their long, clingy skirts. Sitting in the Triangle Park, I watch a woman wearing shimmering gold-green netting over a silver bikini jaywalking with her boyfriend trailing in her wake.

I rarely see their faces. The mask is nearly universal. Even the woman in the gold-green netting had her face conscientiously covered. The situation is the same in Tokyo. I believe most people enjoy wearing the mask or don’t think much about it; the minority keep it in place because of the threat of public shame. A small minority of foreigners and the elderly will risk going maskless, and, occasionally, schoolboys in groups will pull their masks down, too. I sometimes see young women that I imagine can’t bear to compromise their beauty or their makeup with even the most fashionable nylon mask.

The only face that I will remember from Osaka is the young woman working at the girls bar I went to in Umeda. Once we had been hustled in from the arcade, her mask came down. I was protected from her breath and her from mine by a transparent curtain of plastic that hung across the bar. As she went about her duties—making light conversation, laughing at jokes, promptly lighting cigarettes, changing out ashtrays, making drinks—I was free to study her face.

It’s impossible to describe a person’s face without making them sound like a caricature or resorting to limited stock phrases. So, I could say that she looked like one of Utamaro's bijin. That might be too romantic. And those faces are merely meant to evoke a type. I could tell you that she looked like Dan Mitsu. That is a fleshier comparison. Anyways, Dan Mitsu’s face is one you are more likely to have seen those of Utamaro’s women or that of an Umeda girls bar hostess.

I am now distracted, looking through pictures of Dan Mitsu. She became famous for gravure work. (Gravure is not softcore pornography, since there is limited nudity and no simulation of sex. It is rarely more explicit than what you would see in a men’s magazine.) (For a more thoughtful explanation of Dan Mitsu as a larger phenomenon, I recommend Alexandra Hambleton’s essay on Dan Mitsu and the male gaze.)

Dan Mitsu is beautiful in a way that is not fashionable. She looks like the Umeda bars girl hostess, who looks like Utamaro's bijin. When I read the description in “The Bridge of Dreams” by Tanizaki Junichiro of Sawako, the daughter of the gardener Kajikawa, I think she must have looked like Dan Mitsu, with her “fair complexion and a slender, oval face of the classic melon-seed shape, the kind of face you see in ukiyo-e woodblock prints.” The narrator remarks: "I suppose some people would consider her beautiful." (This is from Howard Hibbett's translation in Seven Japanese Tales).

She conforms to beauty standards that are no longer standard. This is what Alice Mabel Bacon described in her 1891 Japanese Girls and Women:

To the Japanese, the ideal female face must be long and narrow; the forehead high and narrow in the middle, but widening and lowering at the sides, conforming to the outline of the beloved Fuji, the mountain that Japanese art loves to picture. The hair should be straight and glossy black, and absolutely smooth. … The eyes should be long and narrow, slanting upward at the outer corners; and the eyebrows should be delicate lines, high above the eye itself. The distinctly aquiline nose should be low at the bridge, the curve outward beginning much lower down than upon the Caucasian face...

A writer in Asahi Shimbun describes her as evoking the Showa (this is the period from 1926 to 1989, but it now mostly describes the postwar period up until the end of the bubble era). By that time, the beauty standards of the Edo were still alive, although they were changing. Hara Setsuko would not conform to them, strictly speaking—and she does remind me a bit of Dan Mitsu.

The idea of the “Showa face” is part of the nostalgia for the postwar period. It can be summed up in a line from Alan Tansman, who was writing about the fans of enka singer Misora Hibari: “longing for a lost past and for an unattained future.” The Showa face is simple and unadorned, perhaps more pleasantly rounded than the “melon-seed” shape (this same description comes up in Chinese, too: guāzǐliǎn). Dan Mitsu is a nostalgic beauty—a relic of another time, a gravure idol for men dissatisfied with popular culture’s glorification of the middle adolescent.

The Heisei (1989-2019) has a face, too. It’s narrow, with large eyes, a high nose, and makeup intended to accentuate or distort those features. I think of Nishino Kana or Hamasaki Ayumi, who were idols with mostly female followings, and also of the girls from the first generation mid-Heisei girl groups, like AKB48, who had a completely male following.

And, so, too, there must be a Reiwa face. It will be what looks good on phone screens. Jia Tolentino wrote an essay about the “Instagram face," produced through cosmetic procedures and FaceTune. I think of the models for the relaunched egg magazine, like Seto Momoa and Kyiiripu, whose faces are only possible through extensive manipulation and surrealistic manipulation and I suspect are optimized for TikTok.

This reminds me of the story of Cai Niangniang, who became the target of an online campaign earlier this year. The outrage started with a Three Squirrels advertising campaign that seemed to highlight her single-folded eyelids. The company was accused of using her eyes to chǒuhuà guórén—defaming or uglifying Chinese people—and perpetuating negative images of Chinese people in Western media. (Hou Qijiang wrote a good essay on this in Chinese, covering the strawman of the “Western Other.”) In response, Cai Niangniang wrote on Weibo that her appearance was “given to her by her father and mother.” That was not completely true. In her plastic surgery diary on Yuemei, she details the story of her rhinoplasty. The low bridge of her nose was quite radically reconstructed, raising it significantly.

She ponders getting her eyes done, too: "I have a beautiful nose, but I don't have the big, soulful eyes of a Westerner." (As I quote and translate the diary, I feel I should offer a parenthetical warning: the pictures of her cosmetic procedures are genuine, but it's hard to confirm the authorship of this diary. It might have been turned out by a social media intern for Yuemei or the clinic itself.) This is a standard of beauty that’s not wholly a Western adoption. Cho Kyo talking about shared beauty standards between Edo Japan and Qing China concludes that “double eyelids are pretty, but single eyelids are acceptable if they are clear” (The Search for the Beautiful Woman: A Cultural History of Japanese and Chinese Beauty, translated by Kyoko Selden). Cai Niangniang decides finally to leave her eyes alone.

The rhinoplasty made her eyes stand out even more; her eyes made the rhinoplasty more impressive. Her face was stunningly beautiful but genetically improbable. Single-folded eyelids—a marker of rural loveliness, rarely seen on a Chinese model that works inside China—and a surgically lifted nose clash in an interesting way. When you browse her Douyin, you can see that through surgical intervention and software modification, she transformed her face into the kind that pops on phone screens.

I am used to seeing faces mostly through social media feeds; I am used to seeing masks instead of mouths in everyday interaction (I recall also that Cho Kyo notes that the femininity and beauty of the women in the bijin-ga was often expressed through their mouths, depicted kissing lipstick onto a silk napkin, say, or blowing into a flute). That is the present and the near future.

A friend sent me a picture of her face while I wrote this. She asked: “How is my face?” It is cropped from the bridge of her nose down, with most of the image being taken up by the background of her bedroom. I note that her eyes have been made larger than life and they are accessorized with stamps meant to look like hand-drawn stars. She has lightened her skin, as well, and added to her hair a red and white bow with a yellow Mickey Mouse silhouette in the center. But that is not to say that she is not beautiful. The artificial can still be lovely; the artificial can still be real. If it wasn’t an antique, Vollmann might have kissed the zo-onna mask. There is Severin in Venus in Furs, adoring the statue of Venus. And so I told my friend that her face was just fine.

The mask, even, covering the face, transforming half of it into a blank fluffy flatness (or a shiny nylon beak, as the latest fashion does) is incapable of concealing femininity or beauty.

But still, there is a reason why the face of the young woman in the Umeda girls bar is written so clearly in my memory. Perhaps—touched up with make-up—it is still inauthentic in some way, but it gives me something that masks and filters obscure.

I wonder if it is worth spending my final night in Osaka drinking cheap highballs in a dingy girls bar, just so that I can appreciate a human face.