This essay about Misora Hibari begins in Beijing in 1966. 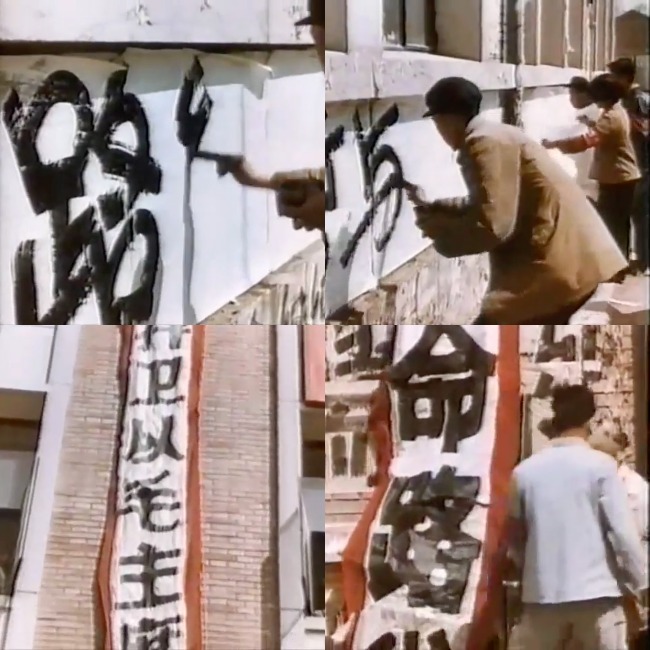 It begins with Zhang Chengzhi, who was the original Red Guard of the Great Proletarian Cultural Revolution. He came up with the name. “Red Guard” was what he signed on a May of 1966 poster criticizing the literary theorist and bureaucrat Deng Tuo.

He was one of the Tsinghua University Middle School students that Mao Zedong addressed in a letter later that summer: “You say it is right to rebel against reactionaries; I enthusiastically support you.”

He followed the Chairman’s directive. He traveled around the country. By 1968, the Cultural Revolution had reached its climax. The revolutionary youth had broken apart into factions. The Workers' Propaganda Teams and the military intervened. But, finally, it was clear that the Red Guards could not remain in the city. They couldn’t be allowed to paralyze the transportation system, traveling around to make revolution. It was becoming hard to get anything done. So, they were sent down to the countryside, to learn from the peasants.

Zhang Chengzhi was the first to volunteer for an assignment. He was sent to Inner Mongolia. He spent four years there before being selected to study at Peking University. There was no college entrance examination, but he had caught the eye of some local cadre. He studied archeology. That is when he started writing, too.

As the revolutionary fervor faded, the Chairman died, and Jiang Qing and the rest of the Gang of Four were sent to prison, the Party steered the country in a new direction.

Not many films had been made 1966 and 1976. Books were written and circulated privately, but not many new works were published. It was almost impossible to meet the requirements of Cultural Revolution cultural policy. With the Gang of Four gone, Literature was put to the cause of reform. Literary beauty and self-expression replaced politically correct revolutionary fervor as the measure of a work.

The writers that emerged in the 1980s were anti-communists, even if they would be forced to reject that label. Zhang Chengzhi, however, remained one of the few true believers. He rejected the Gang of Four’s excesses; he didn’t completely deny the Cultural Revolution. When he started publishing novels and short stories in the 1980s, his experimental spirit matched the times, but the politics were out of step.

He went out to Gansu, again, doing field work. He rediscovered his faith. He had been born into a non-practicing Hui Muslim family, but found the truth in a rebellious Sufi sect called Jahriyya. It was a potent, revolutionary Islam that had fueled revolts against the Qing.

His writing went in another direction. He published a history of the Jahriyya sect.

Zhang Chengzhi in the 1980s was still looking for alternatives to Western modernity. He did not deny Maoism, but it was clear that international leftist revolutionary politics were on the wane. He saw an alternative in the global resurgence of Islam. The same trends were sweeping China as were sweeping North Africa, the Middle East, and Central Asia. The control of religion was relaxed just as the social structures of the Maoist era were being torn down. It made sense for China’s Muslims to revive their faith and its attendant structures.

As for domestic politics, political Islam also provided a counterbalance. In the waves of protests through the second half of the 1980s, Muslim leaders frequently took center stage. Memory of the protests of the summer of 1989 usually center on Beijing and groups of students and workers agitating for political reform, but in May of 1989, Muslim students in Beijing had marched on Tiananmen first, taking provincial protests over a book about Islam to the capital. They were not protesting against the government, exactly, but calling on the state to more closely enforce laws about religious tolerance. (The book in question was about the sexual practices of Muslims. It claimed that the pilgrimage to Mecca was an excuse for homosexual orgies and sex with camels.)

Rather than revolutionary Marxism, it was Islam that seemed to offer credible opposition to liberalism in both China and the world.

Missing from most accounts of Zhang Chengzhi’s life is the time he spent in Japan in the 1980s. (You can read one of those accounts by Julia Lovell: "From Beijing to Palestine: Zhang Chengzhi's Journeys from Red Guard Radicalism to Global Islam.") He was a student there and occasional drifter in the city. While most Chinese sojourners in Japan in the 1980s were fascinated by the country’s postwar industrialization and immense wealth, Zhang Chengzhi was interested in what was left of Japanese radicalism.

He was fascinated by student protesters and the Japanese Red Army, who he saw as part of the same global struggle that he had fought against Western liberal democracy. He became enamored with the protest singer Okabayashi Nobuyasu.

“I quickly grew tired of all the ambiguity and obscurantism in the fiction of the time,” Zhang Chengzhi wrote. “A friend introduced me to the music of Okabayashi.” He wanted something straightforward, honest, and political, and he found it in the folk music of Okabayashi.

Zhang Chengzhi mostly gave up on writing fiction after he found his faith; Okabayashi Nobuyasu found his voice and lost his faith.

His father was a follower of the Omi Brotherhood, founded by William Merrell Vories, a missionary that had stayed in Japan through the 1930s and 1940s, becoming a naturalized Japanese citizen and swearing an oath to the Emperor. Okabayashi became disillusioned with the Omi Brotherhood and found socialism and folk music. (Pause here and listen to Okabayashi Nobuyasa playing “Sanya Blues,” a ballad about living down and out in a Tokyo neighborhood known for its flophouses and for its pitched battles between union organizers and organized crime.)

He became a star among the students of ‘68. His songs were the soundtrack of the labor movement and the occupation of the universities. The movement burned itself out. Okabayashi burned himself out. The spirit of ‘68 faded. Okabayashi started a rock band.

Zhang wrote frequently about Okabayashi. The two men met in 1984 or 1985, following Zhang’s publication in a Japanese journal of an essay—"A Hopeless Avant-garde"—on Okabayashi and political art. In another essay from around that time—"Singers are like Guerrillas"—Zhang Chengzhi reminisces about Okabayashi singing his daughter to sleep. He was disappointed that Zhang Chengzhi had abandoned explicitly political music.

By the end of the 1970s, Okabayashi Nobuyasu had moved on to singing and writing enka, the national ballad form.

Enka is not ancient. It’s not essentially Japanese, either. Its use of pentatonic minor scale gives it a now characteristically Japanese sound, but you can hear within it borrowings from global popular music of the 1920s to 1940s (that includes Chinese and Korean pop music, American jazz, etc.). It’s lyrically heavy on emotional pain and doomed romance. After the war, enka was unfashionable.

If anyone could be chosen to represent the artform in the postwar period, it would be Misora Hibari. (Pause here and listen to Misora Hibari singing “Matsuri Mambo,” detailing a raucous Asakusa festival scene.)

It was reading about Okabayashi because of Zhang Chengzhi that led me to pay attention to Misora Hibari. 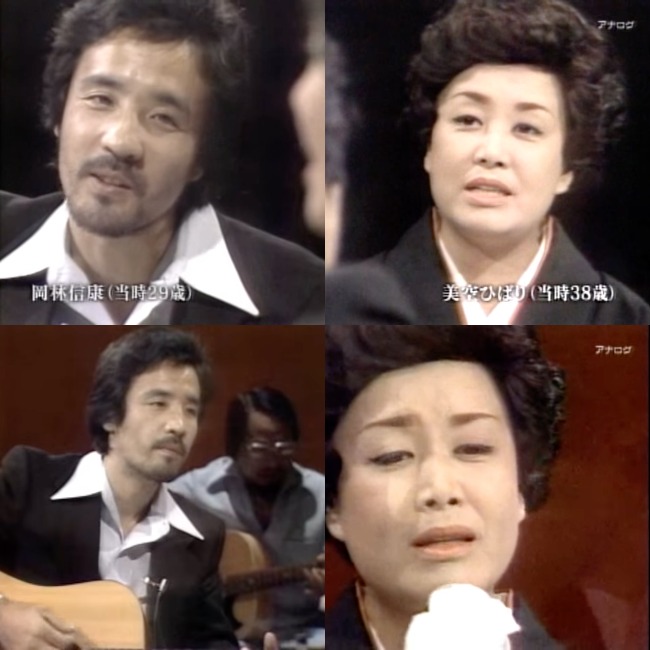 I found a video of them—Okabayashi and Misora Hibari—on a studio stage sometime in the late 1970s. He was respectful and quiet. She was sad and glassy-eyed. They sang one of the songs—"Floating on the Wind"—together that he had written for her. (Pause here and listen to Misora Hibari singing Okabayashi’s “Moon on the Night Train.”)

Misora Hibari was the symbol of the national ballad form. She got her start as a child singer in the 1940s and went on to become the voice of postwar nostalgia.

By the time Misora Hibari first sang "Mournful Sake" in 1966, she and Japan—like Frank Sinatra and the United States in the 1960s—had begun to drift apart. "Even in the 1960s," writes one critic, "she gave off the aroma of the farm, of the trainloads of pupils transported to Tokyo en masse to work." As she sang of enduring the anguish of lost love and of painful partings, in the mournful melodies of the minor pentatonic scale, Hibari's boozy sensibility no longer spoke to many in a nation buoyed by economic success. Though she had suffered with the people in the ruins of postwar Japan, the people had moved on and hence no longer needed her. To many, hers was the music of a dead nation.

To the students of '68 and Zhang Chengzhi, enka was apolitical—or regressive, or reactionary, or lame...

In the lyrics of enka, self-expression sometimes had to be done indirectly or figuratively. Once you knew the code, it was easy enough to read. But it didn't suit the howls of protest or the jerk-off philosophizing coming of the '68 generation. They didn't have time to figure out the form. They saw

Its performance was more clearly political. Holding onto enka and some sense of what was deemed essentially Japanese was an act of resistance. (Pause here and listen to Misora Hibari singing “Mournful Sake.” She cries in this performance. I don’t know if you can find a performance of the song in which she is not brought to tears.) 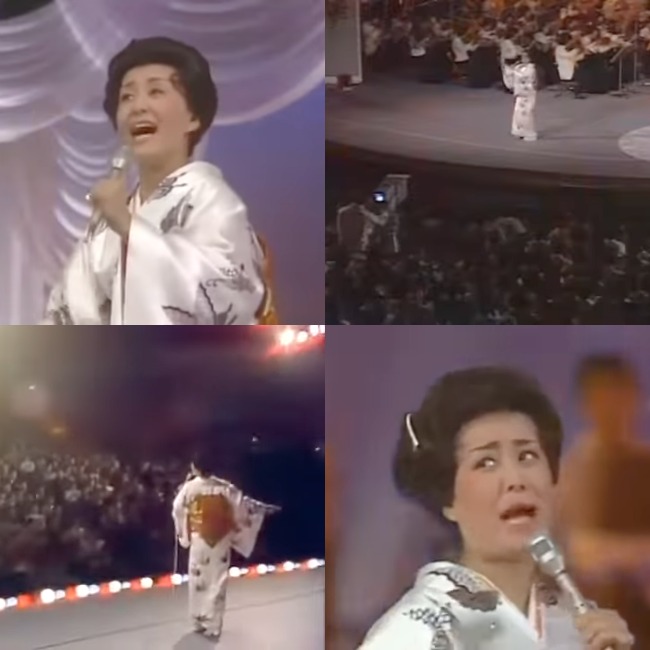 Tansman argues that Misora Hibari “was a heroine of, for, and by the people in their resistance to the 'democratic' ideal seen to have been imposed by the United States on a defeated Japan.”

In pop music, the war had not happened, but in enka, it was being remembered. Misora Hibari would still sing songs like “Brothers-in-Arms,” about the Manchurian front, and “Mother at Kudan,” which tells the story of a mother visiting her son’s grave at Yasukuni. These songs are not celebrations of the war or Japanese aggression. They are laments for lives lost. To perform them in the 1960s and 1970s was a powerful statement in a country where remembrances of the Second World War are split between shame and denialism. (Pause here and listen to Misora Hibari sing “Comrades-in-Arms,” a gripping narrative about soldiers on the front, with one man cut down and his friend vowing to bring home his pocket watch. If you don’t take anything else away from this, I want you to listen to this song. There is also a live version that you can listen to.)

Perhaps Okabayashi Nobuyasu realized it, even if Zhang Chengzhi couldn’t understand it. Enka was resistance to Americanization in all forms.

In the years since Misora Hibari’s death in 1989, enka has slipped further from relevance. It truly does feel like “the music of a dead nation,” as Tansman puts it. There are still television programmes devoted to it, but it rarely makes primetime on the main channels. Artists still record enka; if they are not over the age of sixty-five, they stand out. It is part of the culture that was irrevocably corroded.