Standing at the ruins with Miyako Harumi, listening to songs about places that no longer exist and people that died before I was born.

I insist on writing about enka. I know that nobody is interested. This is a challenge to the reader to get through the next thousand words and try to get something out of the performances I'm talking about. But it's also a reality that few people under the age of forty-five have any deep connection to the music, even if they can hum the big numbers.

There is a record shop in Ameyoko that pipes enka songs into the arcade. It is pleasant to walk by on a quiet morning. In the afternoon, the sad, old songs are drowned out by the rumble of crowds and trains and the pop music blaring from shops.

Nearly every postwar pop music innovation by Japanese artists has been archived and curated, appreciated sincerely and ironically, remixed, de- and re-contextualized, and mined for meaning by outsiders. This happens algorithmically now, when Haruomi Hosono and "Plastic Love" and Ryo Fukui are slid into the sidebar. Even if the packaging is exotic, the music is familiar enough. That’s not true for enka, which was, at least by the 1960s, often suffused with an inward looking cultural nationalism. Although it had fed from global pop culture circuits as much as from traditional music, it was eventually fenced off as a refuge from Americanization... 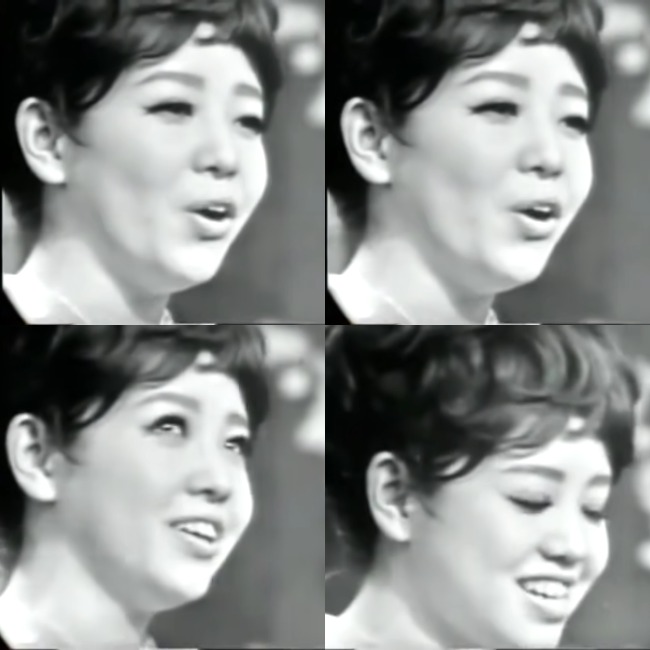 Listen to this performance: Miyako Harumi 都はるみ, April of 1966.

She had just turned eighteen. She was seventeen by local reckoning, so that’s how her age is usually given.

She is performing here on an NHK programme called Festival of Local Songs (or Hometown Songs or Heartland Songs: ふるさとの歌まつり), broadcast from Kokubu, Kagoshima.

The song is “Anko Tsubaki is the Flower of Love” (here, again, I struggle to come up with a translation but the original is: アンコ椿は恋の花, with anko アンコ being a dialect term for “elder sister,” and the tsubaki 椿 being Camellia japonica). It was her first major hit.

The tune was composed by Ichikawa Shosuke 市川昭介. The lyrics by Hoshino Tetsuro 星野哲郎 are about a doomed romance. It uses imagery from the island of Izu Oshima.

We are watching a fairly conservative enka number performed at a time when this national ballad form was turning inward.

In an age of Americanization, enka was resistance. This isn’t a pop song about life in the city or about the new Japan that had just hosted the Olympics. It was about rural life and people left behind. This was not the music of young people in the city (here, that’s more true, since we can see that most members of the audience are middle-aged and we know that they are somewhere in Kagoshima). Enka became songs for the homeland, as the title of the NHK programme suggests. The reactionary mood of cultural nationalism and social conservatism wasn't expressed in the pop music on the radio, but it is here, in this song and in this performance.

Since traditional music had already faded from importance, enka became in the postwar period a new traditional form. Although it had been formed—not only from traditional music but also—global cultural circuits and Western pop sound, those influences were amputated or concealed.

Miyako Harumi singing the song on NHK in 1966 can be appreciated as a modern vocal pop performance. The joy she seems to take in the song is infectious. The way her eyes dart flirtatiously under her heavy false eyelashes contrasts with the story of provincial longing told in the lyrics.

There are other levels, though.

The performance borrows heavily from traditional vocal performance. This was supposedly the result of Miyako Harumi’s mother telling her daughter to pattern herself on rokyoku singers. You can hear it in the guttural vibrato, the barking yelps, the rasps…

(Let’s leave it to this parenthetical comment, but it is also worth taking into account another theory, put forward by Wajima Yusuke 輪島裕介, that she is borrowing from pop singer Hirota Mieko 弘田三枝子, whose growl was self-consciously borrowed from jazz and R&B records. That seems credible. But the myth of the Harumi-bushi はるみ節—her trademark style—rarely acknowledges this debt, if it exists.)

Like watching a regional Chinese opera form or an Umm Kulthum performance, it is easy to appreciate certain things—the tightness of an orchestra, the voice, the poetry—but other things remain known only to those that understand the patterns and the rules. Christine R. Yano uses the word kata to refer to the “patterned forms” in enka:

Although these performative kata are not indicated in the score, they constitute an important aspect of the musical language of enka. In theory, a singer who had never heard a particular enka song could sing it "straight" by reading the score note for note as written. The result would be recognizable as enka, but few fans of the genre would savor the listening experience ... A skilled enka performer embellishes the score in codified ways, playing with the rhythm … and adding appropriate vocal ornaments. (This is from Tears of Longing: Nostalgia and the Nation in Japanese Popular Song. My account of enka is far too limited; I recommend this book.) 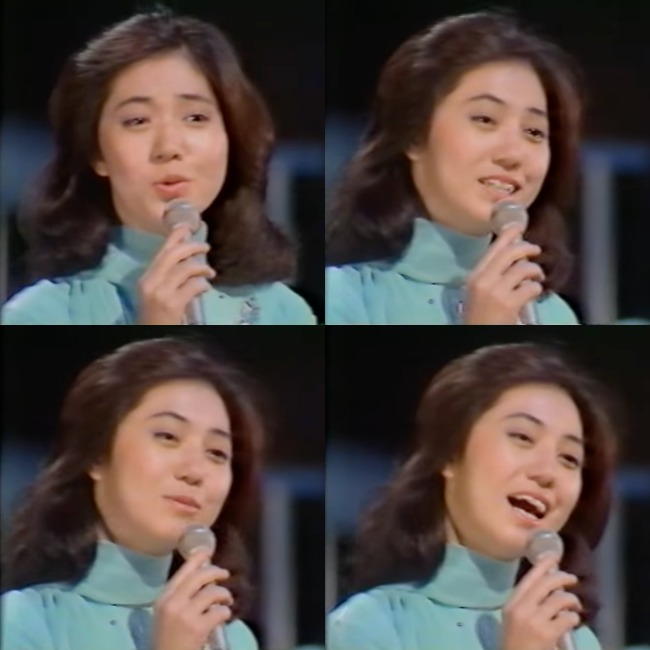 We can see it by watching another performance of the same song: Ishikawa Sayuri 石川さゆり, September of 1979.

Like Miyako Harumi in 1966, Ishikawa is at the height of her powers here. She had just turned twenty-one. Her biggest hit—"Tsugaru Strait - Winter Scene" (津軽海峡・冬景色)—was still in circulation.

The embellishments are different; she is singing it according to her own practiced patterned forms.

Miyako Harumi joins her on the stage. Here, she is thirty-one years old. Her voice has changed, or she is singing the song differently. She does not hit the first syllable of the chorus with the same rasp as she did in the 1966 performance. There is a guttural vibrato on the close, hitting the word hana, but it seems not to be accomplished with great effort.

The 1966 performance becomes even more incredible because we are seeing something that even Miyako Harumi herself will struggle to replicate. I wonder if she is unknowingly destroying her voice with that growl (perhaps she also had a vicious schedule; the industry was not forgiving). That is what I like to believe, since it adds a tragic air to the 1966 performance. She is singing her voice out.

It adds a bittersweetness to the 1979 performance, too. The Harumi-bushi exists mostly as an ideal, preserved in memory or on records. It’s always just beyond her reach. (It is worth noting that Miyako Harumi is still alive, just in case I have slipped too many times into the past tense, although, since 2016, she has rarely appeared on television.)

This may or may not be true, of course. That is the way I like to tell the story. 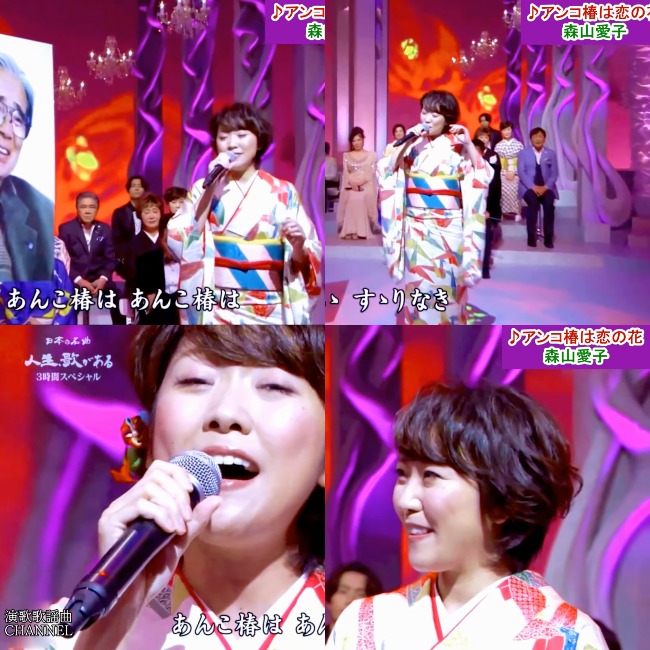 It’s a good performance, from an NHK broadcast honoring the life’s work of Hoshino Tetsuro, who passed away in 2010. But it’s also a way to see something about the contemporary state of enka. And perhaps by seeing where it ended up, we can figure something out about its earlier form.

Moriyama Aiko is thirty-two years old in this performance. She is much older than the girl performing the song in 1966 and a few years older even than the woman that supervises Ishikawa’s performance in 1979. But she is younger than everyone else on the stage.

She does not perform the song with quite the same verve as Miyako Harumi in 1966, but it’s clear that she’s modeled the vocal performance on the Harumi-bushi. She is singing for an audience—on the stage and watching at home—that treasure the original interpretation. She manages to credibly hit some of the same embellishments.

Enka feels alive in 1966, sung by Miyako Harumi, and it feels like there is still possibility in Ishikawa Sayuri’s 1979 performance, but by 2017, it’s fairly clear that the artform is performing nostalgia. The performance by Moriyama Aiko is technically proficient but lifeless.

Innovation wasn’t impossible, but, turning inward, it became increasingly difficult. It was not simply a matter of injecting sonic or thematic freshness from outside; innovation required a mastery of patterned forms (a young talent would need to master them to be taken seriously, first of all). And, anyways, Americanization was too powerful. Rock n' roll sucked the life out of everything. Cultural nationalism only has a place in modern Japan if it's safely performative.

Enka is about places and people that no longer exist. Enka is about the defeat of a nation that few living people can even recall. It's an old woman in a pristine kimono, singing about love affairs with men that died decades ago—or her granddaughter putting on a show, singing the old songs to make her grandmother happy.

To some extent, like the bittersweet experience of listening to the diminished voice of Miyako Harumi, this is my own projection and should not be taken so seriously. The sadness of the genre, the fact that it faded, the sonic and ideological character that makes it unable to be repackaged... This makes it even more beautiful.