Looking down. From a hotel room in Tokyo. 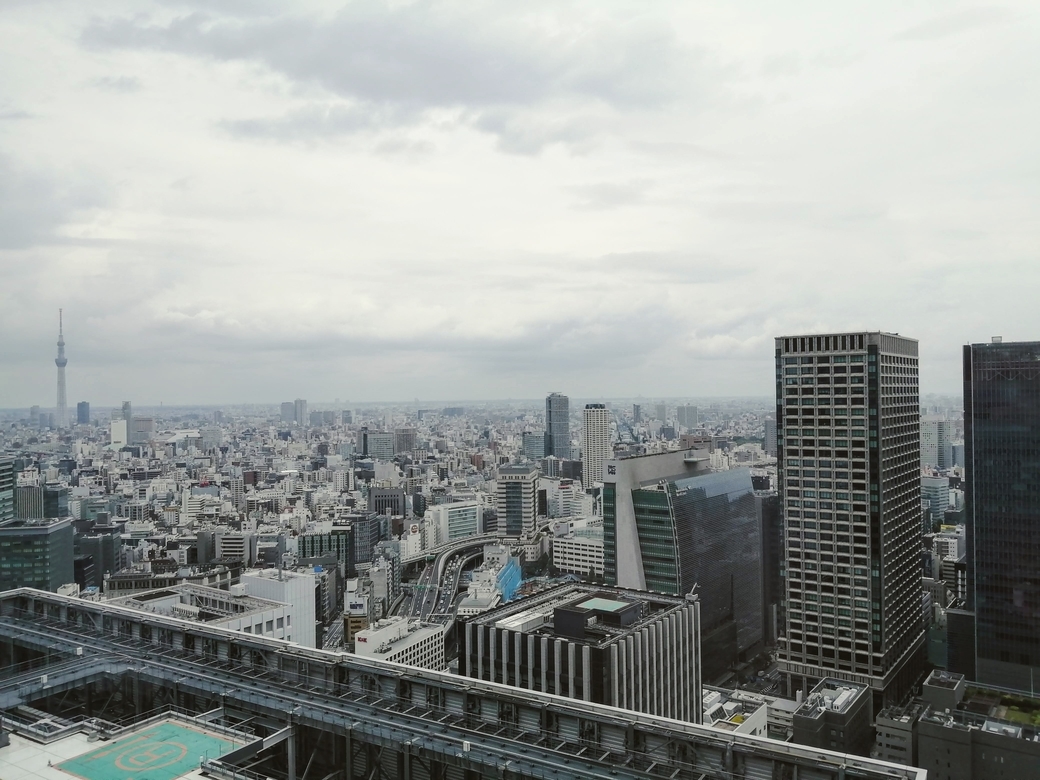 The Imperial Palace is below, and so is the national road system's kilometer-zero terminus marker. Everything emanated out from here.

All the energy, manpower, and expertise for imperialist expansion turned inward at the end of the war and was directed toward reconstruction and reindustrialization. This is the result. Whatever political battles were fought in the Showa, they could not shake this. The construction industry captured the bureaucracy. Through the oil shock and the popping of the asset price bubble, more concrete was poured here than anywhere on the planet. The politicians took their envelopes, organized crime managed the labor, and the construction companies poured the concrete.

From above, it’s hard to believe it’s real. The scale of it makes no sense. This same blanket of gray has been laid out all the way to the mountains, all the way up the coast... It echoes out across the islands. And all of it was planned and directed from right here.

It’s hard to believe that this anthill is now occupied by a society that seems to be in terminal decline. They had their run and they blew it, you might say. You might disagree with the premise completely. At least we can be fairly sure that this time the city will not be destroyed by fire or aerial assault. It will decline and decay. The process has already begun.

I mean that the great postwar civilization will disappear, not the city itself—not completely, at least. The basic functions will be preserved and the kind of modern infrastructure that tourists need. Perhaps they'll swallow their pride and let the Chinese turn it into all into a luxury housing development.

When I stay here alone, I spend most of my time walking around Ginza, south of the station, or north to Nihonbashi.

Of course, I should be working. That is the reason I am here, in a hotel room a short train ride from my own home. I am supposed to be shutting out the outside world, eating room service, and plowing through the pages. But it is too tempting to stroll.

I go to the department stores. I am partial to Takashimaya.

Proud old buildings don’t exist out in that blanket of gray but they are still standing here, at the center. Takashimaya was built in the 1930s, like most of the government buildings clustered around the Imperial Palace. It is connected to a more recent addition by a skybridge and a roofed arcade, but it is best to enter through the original building.

The ground floor feels a bit like a market hall, with stalls set up throughout, then anchor stores on the margins, like Hermès and Goyard. The basement sells food. It connects onto the Hibiya Metro. It’s the place to buy ninety dollar melons and find the satellite shop of a Kyoto katsuobushi dealer or an Alsatian bakery. The upper floors look like any other department store.

It is a good place to watch people. There are few men among them. After all, they are places where mostly women work, selling things mostly to women.

The older women shopping there are products of the same wealth and power that built the gray sprawl. They are still spending money generated in another era. They will be dead and burned up before it matters. The young women that flit around them understand the nature of the nation’s wealth better than anyone else.

Maybe they can’t appreciate the dignity of old money with as much detachment as I can. Maybe I can't appreciate this view of the city because I have to live down there.