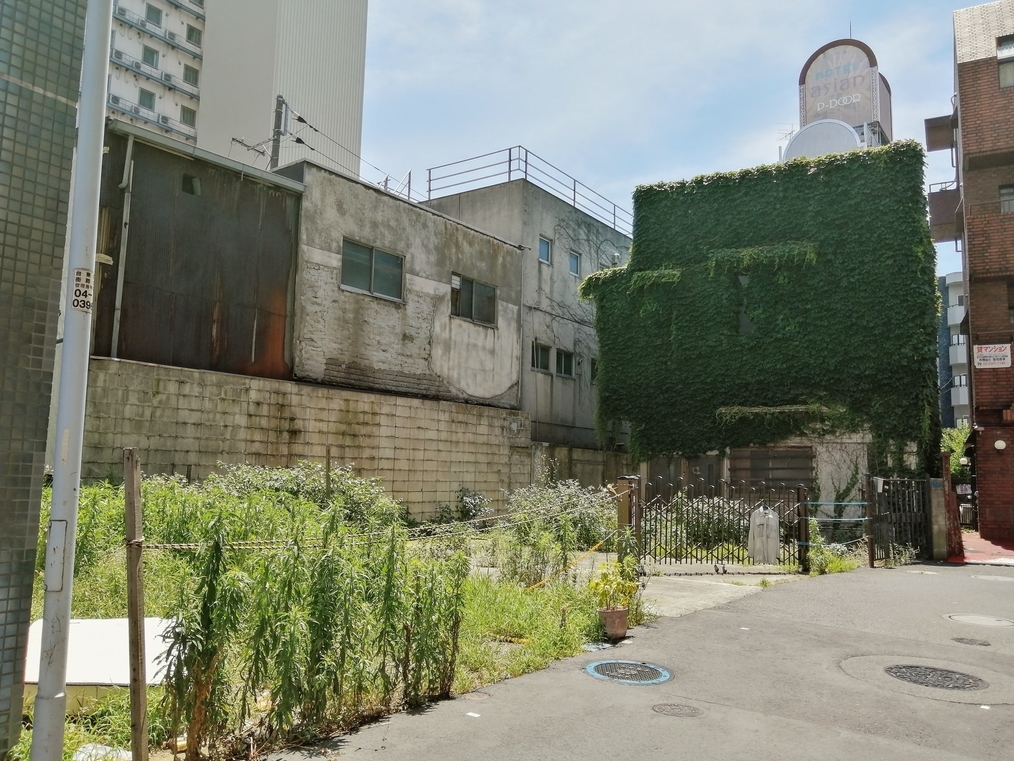 I moved my TV out to the balcony. It serves as a windbreak, stopping the blast of the air conditioner’s compressor from knocking over the slender beanstalks that I have already propped up with plastic straws.

It stopped working. When it did, I only flicked it on after an earthquake. In March, I watched the feed from Fukushima as the water went out and the boats left the harbor. There wasn’t much on. Originally, I paid the subscription fee for satellite service because I assumed I needed to watch BBC World News. That never worked out. I bought a radio to replace it.

This isn’t a sermon against television. I am worried about my plants. It will be over a hundred degrees tomorrow. The rainy season ended early.

Out the window of the train back from Mito, the fields were as lush as the patch of weeds growing behind a love hotel in Uguisudani. I ducked under the rope and tracked my feet around, stirring up the green, dusty smell. I wish I could transplant my beans and yuzu.

I went to the discount supermarket. It is the only place left that hasn't turned everything over to robots. I bought lychees from Taiwan and bananas and pineapple from the Philippines (I recall the effort last year to have us buy Taiwanese pineapples to support democracy but that hasn't been mentioned recently, and I have not received any guidance on the politics of Ilocos fruit). The only domestic product was half of a tiny melon. It came from Ibaraki. I noted that the tarako came from Alaska. The butter is from Hokkaido, at least, but the forage for the Holsteins comes from Alberta.

When I came home, I looked at social media. Without a TV, I missed Kurokawa Atsuhiko on NHK. The party's position is that NHK should be smashed, but the state broadcaster is not petty enough to exclude him from debates. In his remarks, he broke two taboos, pointing out that the Liberal Democracy Party started as a project of the Central Intelligence Agency, and telling everyone that Abe Shinzo is a friend of the Unification Church.

With elections on, I have paid more attention to the many fringe parties that flourish in this country. A lively democracy where the ruling party has held control for more than six decades (they were shuffled out briefly, I have to add, to satisfy my internal fact checker). There are parties of targeted individuals and anti-maskers. There is a woman running in Tokyo whose policy proposal is moving all the American military bases from Okinawa to Tokyo Bay. She is being provocative. She's against the bases.

There is a reason I mentioned the provenance of the fruit. This would be my own cause, if running as a marginal candidate. I don't care about the Unification Church. I am worried about zero tariff corn. Political and cultural sovereignty is impossible without being able to feed your own citizens.

The food self-sufficiency rate sits at thirty-seven percent. Japan imports most of its fertilizer, too. It imports most of its animal feed. For some reason, this detail strikes me as peculiar: Japan imports American hay. The flood of imports has contributed among many other factors to the agricultural sector withering away. You can see from the train through Ibaraki—the concrete and pachinko parlors and parking lots spreading across the land, the miniscule plots worked by old men and old women, the stretches where the land has been left fallow. Abandoned farmland tends to stay that way. The country can’t feed itself. After the wave of liberalization, rice is the only grain protected. A loaf of bread made from imported wheat and soybean oil is cheaper than a bowl of rice. Rice provided the bulk of per capita daily calorie supply in 1960 but has been supplanted by wheat, seed oils, and meat.

As another food price crisis develops in places far away, the Japanese situation has received some notice. Unless North Korea fires a missile, Russian aggression is the only global news story that receives consistent coverage, so that is the way it is framed, even if most Japanese food imports are coming from the United States, Australia, Canada, and Brazil. The Liberal Democratic Party announced a plan: take measures to ensure that Japan can still participate in global markets. This might mean removing any remaining barriers to American imports.

Everything rests on zero tariff corn. American control was sealed by feeding the Japanese surplus wheat in the 1940s. But there are scenarios unlikely in the short term and likely in the long term where the flow of agricultural commodities slows. (It seems less likely but we could also imagine some kind of political and cultural movement that pushes people away from a diet heavy on American agricultural surplus and back toward eating things grown on the same continent—and this could even include some kind of food safety scare, something larger than the mad cow scare that kept American beef out of Japan for a decade.) It would require Japan spinning out of American orbit. Japan needs to be part of a continental empire, at least at its present population size. (This idea was put to my by a friend and anonymous political commentator who used much more crude terms. I am only mentioning this so that at least he knows that I am credit him with inspiration.) So, necessarily, Japan will draw cautiously closer to China (and potentially Russia, although I'm less confident in making that prediction). This might take a long time. It might play out over decades or a century. I'm not sure how much confidence I would place in any of this, but I don't think it's any more ridiculous than imagining Japan Self-Defense Forces will assist the United States Navy and Marine Corps in the liberation of Taiwan, or predicting that the American hold on East Asia will last deep into century. Apart from tapping alternative sources of grain, there would need to be a resurrection of Japanese agriculture and a reworking of food supply chains.

The rebirth of Japanese agriculture would not be as exciting as my juvenile fantasies. I don't know if I could confidently lay out what that would look like. But imagine! We can sow sweet potatoes between the love hotels in Uguisudani. The rustic fascists will lead youth brigades down to the countryside to plant barley. The leadership will eat diverted shipments of Chinese relief grain, of course. My neighbors will receive extra rations for rooting up the tulips on the boulevard and planting the patches with pumpkins and cucumber.

This is was what Tachibana Kosaburo said shortly before the League of Blood attempted a coup and killed Prime Minister Inukai Tsuyoshi: “Even if grass were to grow on the roof of the Mitsukoshi Department Store, Japan would not fall, but if the rain leaked through the roofs of five million Japanese farmers' homes, what would become of Japan?” 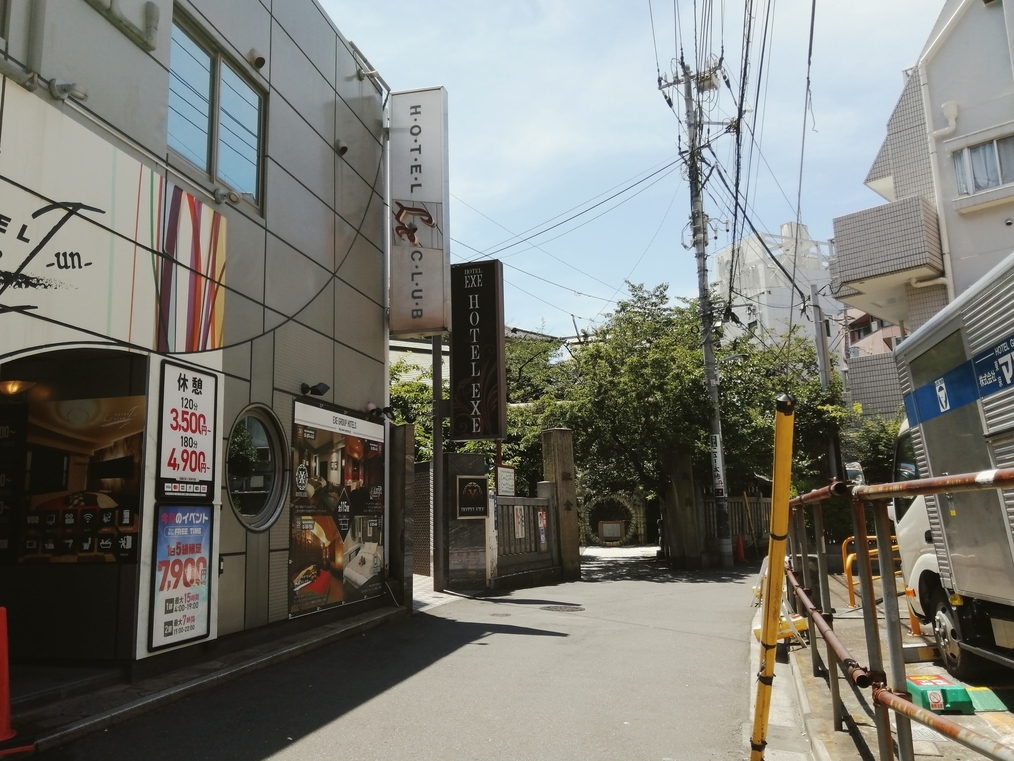