At the beach, unable to write anything. Oiso. 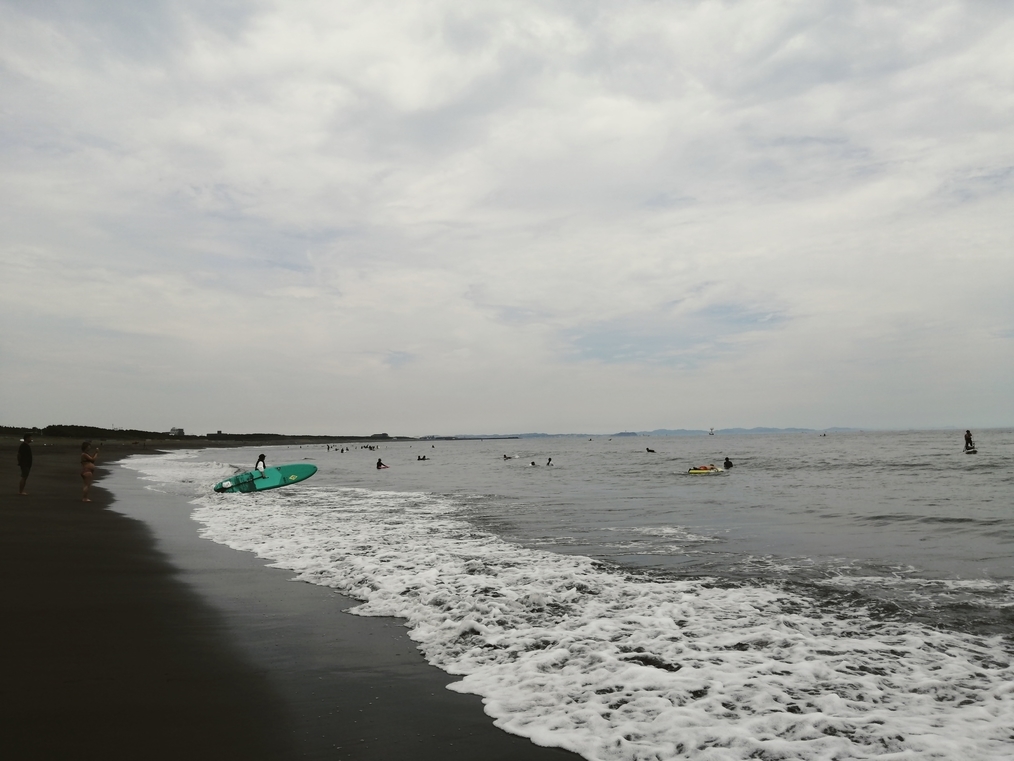 The reflexive greeting in the elevator is a comment on the weather. “It is raining today.” “It’s very cold.” “The typhoon will hit soon.” “It might snow today.” There are subtleties that I don’t appreciate, so I believe it’s best to echo the forecast: “It is hot, isn’t it?”

On Friday afternoon, it was ninety-eight degrees. I tried to emulate the older women in the building, who I believe genuinely enjoy the season, and follow the guidance of our local government, warning again of blackouts. I turned off the air conditioning. When it became unbearable, I went out to sit in the park.

In the late afternoon, a few homeless men were sitting outside the public bathroom, reading recycled manga. Mothers and sons chased each other slowly around the sand pit. Two high school girls sat with their legs spread wide to catch the breeze under their long skirts. A lanky, young salaryman came in, sat his bag under a tree, slipped on leather gloves, and started cranking out sets of pullups off the bars.

I went home and sat under a cascade of air conditioning so cold that it felt liquid.

The next morning, I met A✲✲✲✲ and S✲✲✲ at Ueno and took the slow train to Oiso.

After Totsuka, the city thins out. There are mountains out the right side and glimpses of Sagami Bay on the left.

This is Shonan, along the coast of Kanagawa. It looks like any other stretch of suburban Japan but it occupies a place in the imagination of Tokyoites as the ideal place for a man to early, spending his days raising tanned boys with a wife that picks up occasional shifts at the FamilyMart, plenty of time for surfing, fishing, and playing pachinko.

At the east end are Zushi and Enoshima. Zushi is known as the summertime meeting point of suburban teens and underage drinkers from the city. Nobody surfs. They drink and tan. It has one of the few Red Lobster locations in the country. Enoshima is mostly for Tokyo daytrippers. These places feel almost like Shonan, or try occasionally to present the image, but they shouldn’t be counted. At the west end of the Kanagawa coast is Odawara (beyond it lies the ruined resort town of Atami, which actually belongs to a neighboring prefecture), which is better known for a ferrocrete castle and kamaboku tourism than its beaches. It doesn’t pretend to be Shonan but it could be counted. Oiso is Shonan the closest it comes to the Tokyoite imaginary, too far from the city to be diluted, still cheap enough that a man might actually aspire to spend the summer surfing.

I have gone to Oiso for many years. I used to ride my bike there, long ago, when I lived in suburban Kanagawa. That was another lifetime.

When we got off the train, A✲✲✲✲ said: I can hear the uguisu. You can’t hear them in Tokyo. The beach was almost empty. It is black and gloomy, like every beach along the Kanagawa coast. It was cloudy. S✲✲✲ said: The crows here don’t shout everything. I can hear them trying to talk. In the Family Mart, I pointed out that there was pornography for sale. Neither of them had noticed that Tokyo convenience stores banned pornography ahead of the Olympics.

We lay down a blanket. A✲✲✲✲ had her bathing suit under her clothes. S✲✲✲ changed in the grimy public washroom and came back with her feet stained brown-green. I took my shirt off and waded in with my shorts. A✲✲✲✲ swam out farther than I could have. S✲✲✲ was only interested in sunbathing.

We sat on the blanket together. I put on a Spotify playlist of Vaughn Moore. Lifeguards circled. I pointed out Enoshima. I traced my finger up the line of the coast and repeated to them as I do each time we are nearby the details of the canceled plans to land the Eighth Army on Hiratsuka Beach.

We walked up and down the beach, looking for sand dollars. We stopped to watch a gang of kids in wetsuits holding up the crabs they had caught in the surf. Near them, a young mother in a bikini was absorbed in hand digging a canal. Her son, about five or six, neglected, distracted himself with a soccer ball.

In the afternoon, it started to rain. We dressed. We ate lunch—fried fish sandwiches—at a glass cube near the beach, some new scheme by the municipal government to sell shirasu. We walked to the beach at Terugasaki, where nobody swims, catching a stretch of the Tokaido Road that used to take people from Edo to Kyoto. The smoke from illegal barbecues collected under the overpass that runs alongside the beach. The women of Miss Shonan were being chased by photographers that had paid the equivalent of fifty dollars to take their picture.

We stood for a while, watching the women with perfect stiff smiles. A✲✲✲✲ stripped back down to her bikini. I asked her if she was hoping that the photographers would notice her. We sat for a while on the dolosse, trying to eavesdrop on a conversation between some boys sneaking cigarettes above us. After a while, S✲✲✲ beckoned them down with her pack of Lark and they showed us on their phones picture of classmates they follow on Instagram. They said: There is nothing to do here but go to the beach. I wondered if that was such a bad life.

I wanted to tell them that where I come from, there was no beach for a thousand miles. We had to smoke cigarettes in baseball diamond dugouts, the front seats of Ford half-tons, and fields of rattling dry soybeans.

We walked slowly back to the station. A bilingual sign announcing the history of the place announced that a section of the road near the station had been widened by Ito Hirobumi. I said: He was killed in— A✲✲✲✲ said, in Japanese: Korea. I said: Manchukuo, but the guy that killed him was Korean.

The train seemed to take forever to get back into Ueno.

It is supposed to rain for the next week. I'm nursing a terrible sunburn. 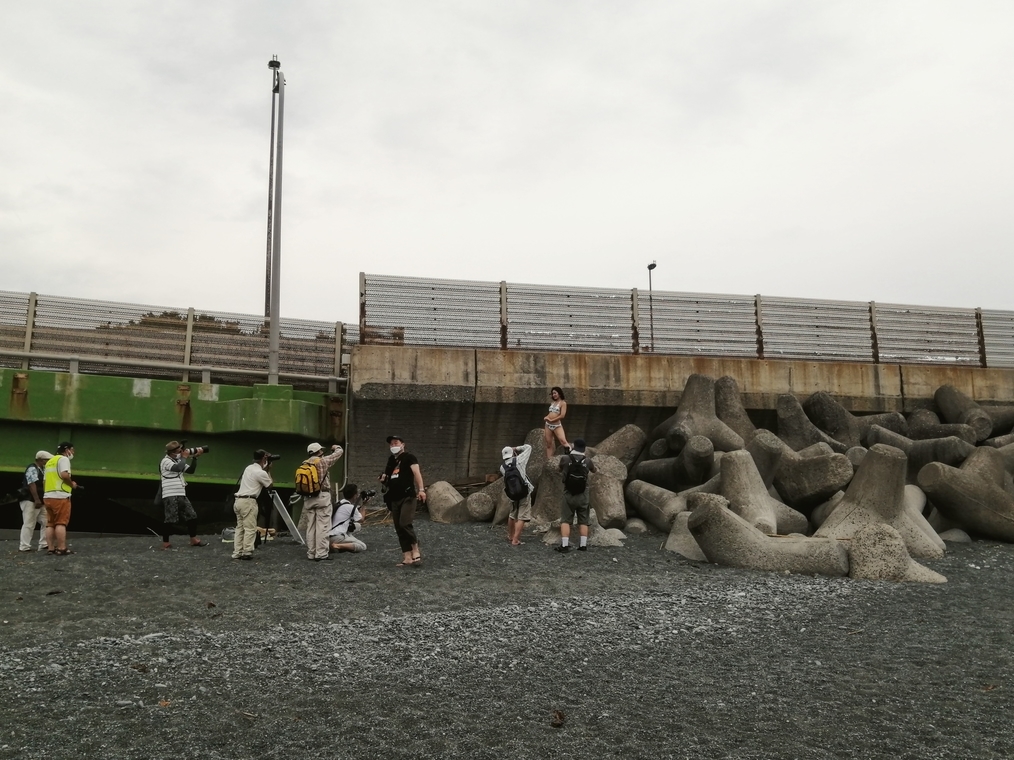