In the window of a bookstore in Kanda, a 1982 first edition of Araki’s Midori. The store is not open. I know that if it was, and I worked up the nerve to go in and ask the price, whatever the figure, that I would be forced to pay it. (How much would it be? For a first edition? I guess they could sell it for close to a grand. It's not the price that puts me off but my aversion to accumulating books.) — Like Araki, I am nostalgic for Minowa. I lived near Ryusen. He lived near Jokan-ji. His father ran a geta shop. All of that is gone now. The address became a parking lot a decade ago. Whatever was there, it had probably been leveled many times since the shop came down. — There is an Ichiyo Memorial Museum in Ryusen and a bust of her in the temple yard nearby. There is no permanent reminder of Araki's childhood here. No statue of him running the backstreets of Senzoku. — Araki tells us that he caught grasshoppers in the train yard around Minami-Senju. He played around the pond behind the hospital. Would the Kannon statue that now stands there have been looking down on him back then? Was there a playground near the shrine? — If you sit in Yoshiwara Park on a sunny late morning, you can watch as the young women of the soaplands come and go, chatting with their neighbors on the stairs on the north side, arriving with photographers to pose under the concrete pavilion, shaded by the vines that thread through its lattice roof, making content for their promotional online diaries, bumming a cigarette off one of the touts on a smoke break, ignoring the drunks… Soon, this will all be gone. There is a reason that the brothels look now like they are under the protection of some architectural heritage authority. They cannot be renovated. This denial by the local ward government guarantees their collective deterioration. The developers will be given the lots. — Midori is a tribute to Higuchi Ichiyo’s Takekurabe. A century apart, the photographer and the writer were neighbors. The title refers to the name of the main character in the story. — Higuchi Ichiyo’s Midori is a girl on the verge of adulthood, growing up on the fringe of Yoshiwara. She is introduced like this: "Her hair—undone it would probably have stretched to her feet—was pulled up tight from the back. ... Her skin was white, her nose well shaped. Her mouth was a little large, but closed it did not strike one as unattractive. Taken one by one her features were no doubt less than perfect. She had a soft, clear little voice, however, a bright manner and a winsome way of looking at one. I'd like to see her three years from now, young men on their way home from the quarter would say when they saw Midori of the Daikokuya, towel in hand, fresh from her morning bath..." (this is from a translation by Edward Seidensticker in Donald Keene's Modern Japanese Literature.) — And Araki’s older, more streetwise Midori, played by an unnamed model, frowns back at us from the page, a cigarette sometimes stuck between her fingers, looking out from saloons and sitting rooms furnished in High Showa sleaze. — In the photograph from Yoshiwara Park, a boy crouches in the background, under the concrete pavilion. A girl sits on a bench. This is recasting the story’s children in the present, still playing on the fringes of the pleasure quarter. The slightly sullen expression of the girl on the bench is also an accidental echo of that of the unnamed model cast in the role of Midori, who frowns back at us on the next page. — Araki’s woman is younger than she is trying to look. If only we could talk to her… If only she was entertaining us in one of the snack bars in the shadow of the soaplands! And this connection is only possible because Araki does not undress her or tie her up or make us beholden to his fantasies. — I think we are susceptible to nostalgia for the time we saw in pictures of our parents—before we were born or before we could have firm memories, but a mysterious but familiar moment seen in a photo album. A time that looks close enough to our own but just a bit strange. 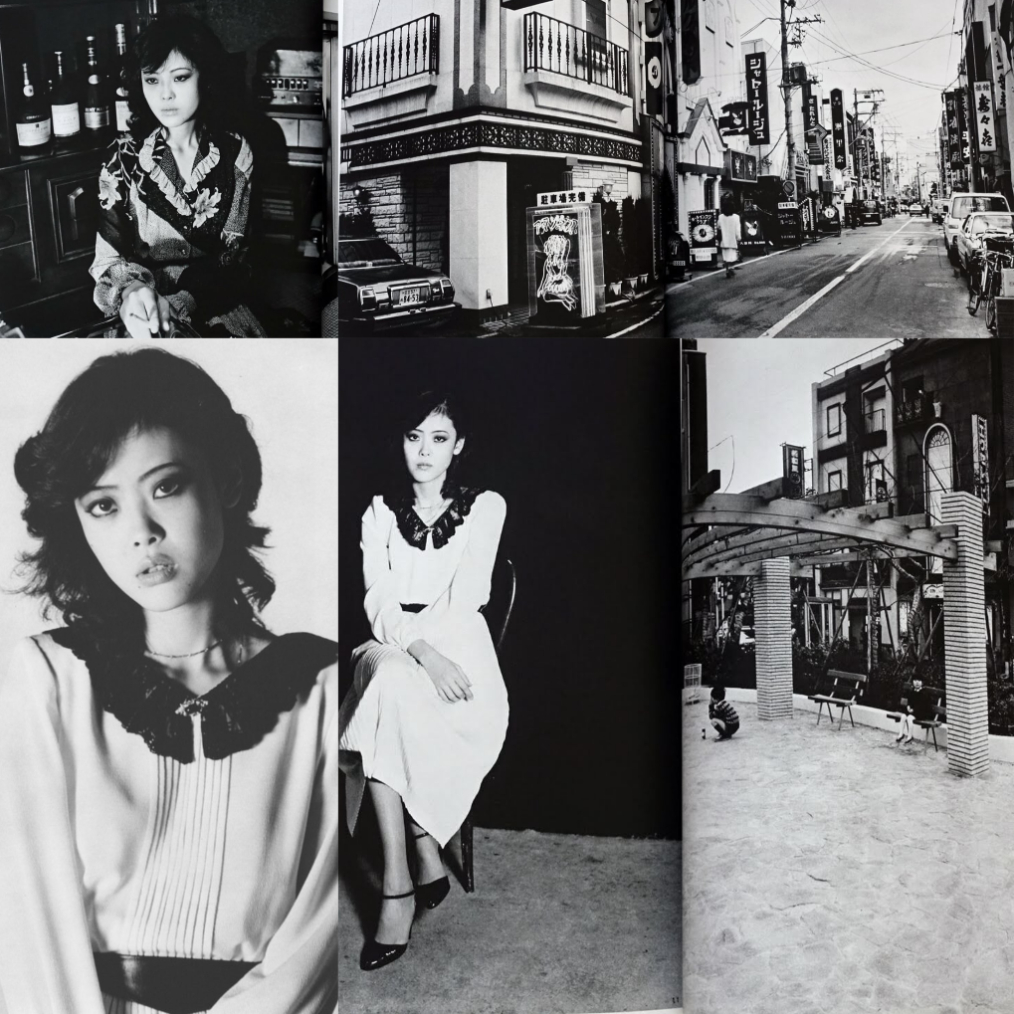 So much is going unwritten. An essay about Adachi Masao is at the top of the list, continually derailed by further reading and films that I can’t track down. I will write about Mori Masako's 1986 farewell concert, even if I know that nobody wants to read about enka. My energy has been diverted. The summer drags on.