aka, "some people suck but urbit has tools to begin to discourage shitty behavior" month.

The impetus for this post is the recent update that Urbit just rolled out: naive rollups for Azimuth, the public key infrastructure (PKI), of the network. If you didn't know already, Azimuth is this PKI that enforces the cryptographic fact that your urbit is yours. Unfortunately, bootstrapping this functionality meant temporarily lashing Urbit to Ethereum. The level and specifics of that disfortune vary depending on the perspective of the person assessing the dependency on Ethereum; Bitcoin maxies just hate any mention of ETH being useful, no-coiners get all confused about metamask wallets, and just about everyone is pissed about the gas crisis. Announced in 2021, 'The Gang Solved the Gas Crisis' was more than just an homage to Always Sunny, rather this undertaking outlined an exercise to enable a Layer 2 (L2) implementation of elements of the Azimuth contracts. This project was heavily discussed at Assembly, tested over thousands of transactions to clear bugs, and carried through until Valentine's day, 2022 when bridge.urbit.org was officially updated and L2 was made available to the masses.

L2 began with the kindness and sincerity we have grown accustomed to here on Mars; to say thank you to urbiters who have been hanging out on the network before the deluge of new L2 plebs, Tlon gave out some Valentine's. Custom invite pages for dedicated users to share with their friends and onboard new users without all the pain of Ethereum wallets, transactions, and gas fees. Thanks to everyone at Tlon who came up with this idea and executed it on a day that is supposed to be about love and joy and friendship.

Unfortunately, the combination of L2 bringing in new users, typical crypto-degeneracy, and many of us urbiter's forgetting how hostile people from PVPnet can be, the page that they created for me had a url like this:

Now, as a person reading this I'm sure you say to yourself, "Oh, that's cool, they gave you a nice url with your @p in it." Yes. Yes, they did. And thank you for thinking such sweet thoughts.

Now put your PVPnet glasses on and try again. In a world where your behavior is transient, where identities can be scrapped as they acrue shitty reputation, and communities are fleeting rather than persistent, your reassessment probably looks something like this: "Hey, some kind martian just sent me this url with free cryptographically owned NFTs... What if I just change ~sampel-palnet to other prominent names on the network and see how many of these NFTs I can steal?"

Yea. So during the 2-3 hours when I first received my url link from Tlon, and when I could think about who would benefit from a free urbit planet, some shitbird claimed all of three of the planet invites that were on my custom landing page. 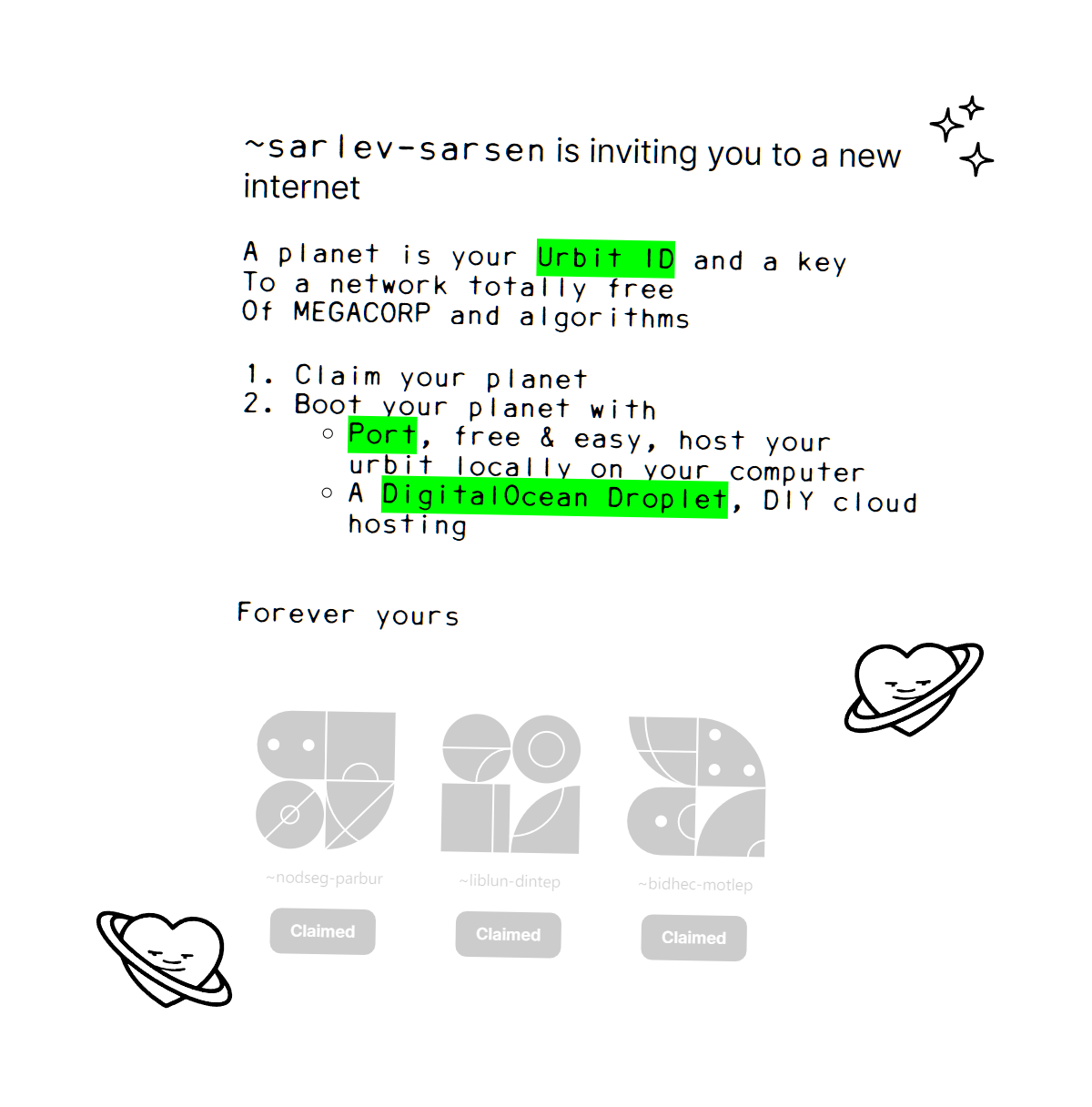